At the outer entrance to Boothbay Harbor, passing the two small islets known the Cuckolds was a dreaded experience for mariners at night and in foggy conditions. In 1874, the construction of a black tripod on the southern end of the eastern rock served only as a day-marker. After mariners filed numerous petitions, Congress appropriated $25,000 on March 3, 1891 for the construction of a fog-signal station at this dangerous site – located off Southport’s Cape Newagen. In the photograph, the trumpet seen exiting the roof warned vessels of their approach to the Cuckolds. On November 16, 1892 the building project was completed with the station consisting of the fog-signal house, an attached dwelling, fuel house, boathouse, and boat-slip. Then & Now – What Changes Have Occurred ? 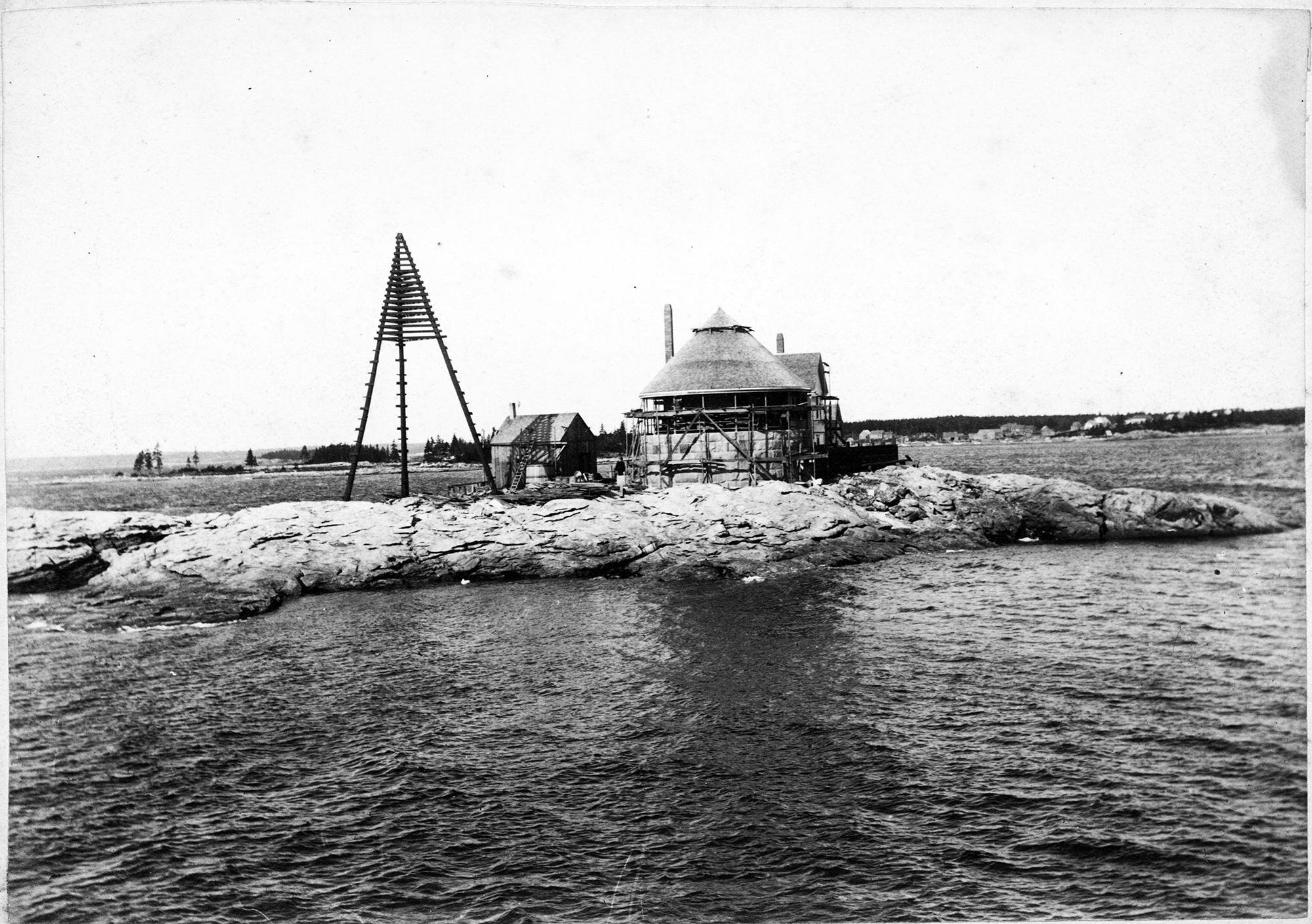 This 1892 photo was taken when the station was under construction. The fog-signal building’s unique structure consists of a base of granite block – built to protect the station from storm waves washing over the rock. A brick fog-signal house of similar form, but smaller in diameter, surmounted the granite base. In the photo, a temporary shed for storing building supplies can be seen behind the day-marker. 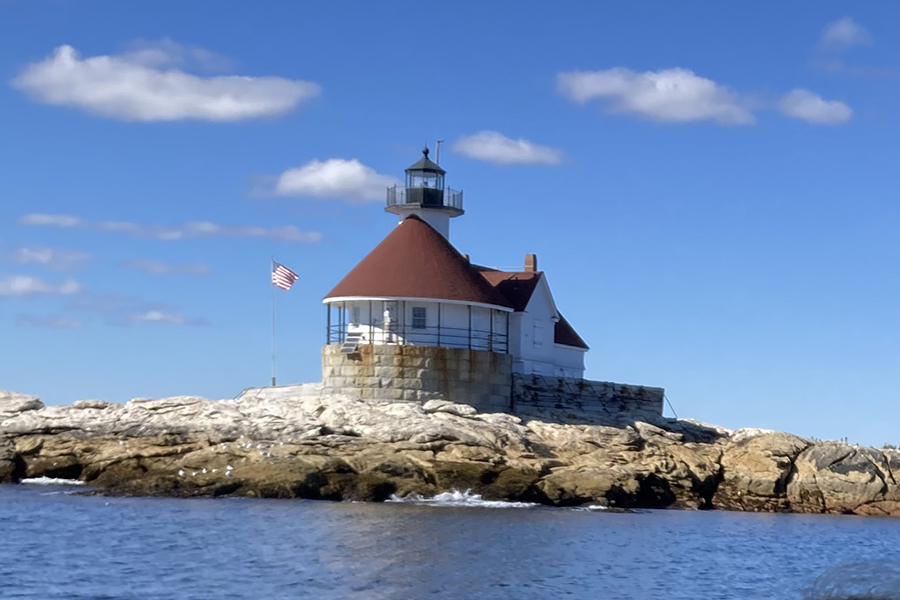 After 15 years of service as a fog-signal station, in 1907 a wooden, octagonal-shaped lighthouse was built on the roof of the fog-signal house due to limited space on the island.  A 4th order Fresnel lens was installed with its characteristic signal being a double white flash every six seconds. Today, an LED optic occupies the lantern-room producing the same signal. 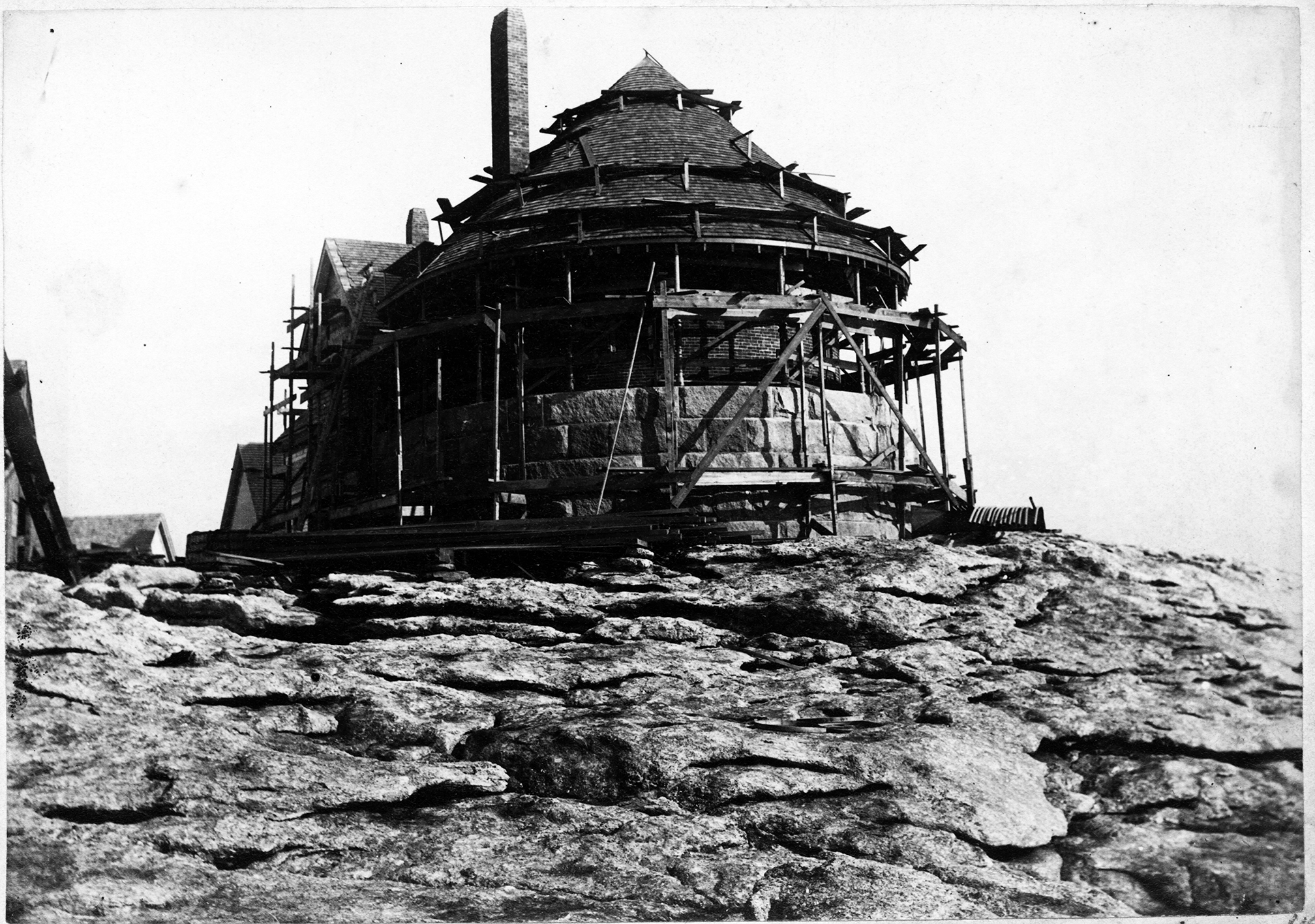 The fog-signal building’s design consists of a semicircular, granite base 36 feet in diameter and 12 feet high. Its hollow center housed fresh-water cisterns and a storage-room. Used in construction were 105 yards of granite masonry, 430 casks of cement, 100 tons of sand, and 60,000 bricks to build the fog-signal house atop the base. In February 1978, the keeper’s dwelling and boathouse were severely damaged by a storm. As a result, the U. S. Coast Guard decided to raze the structures leaving only the fog-signal building and its lighthouse. It remained this way for 35 years until local citizens banded together to rebuild the dwelling and boathouse. 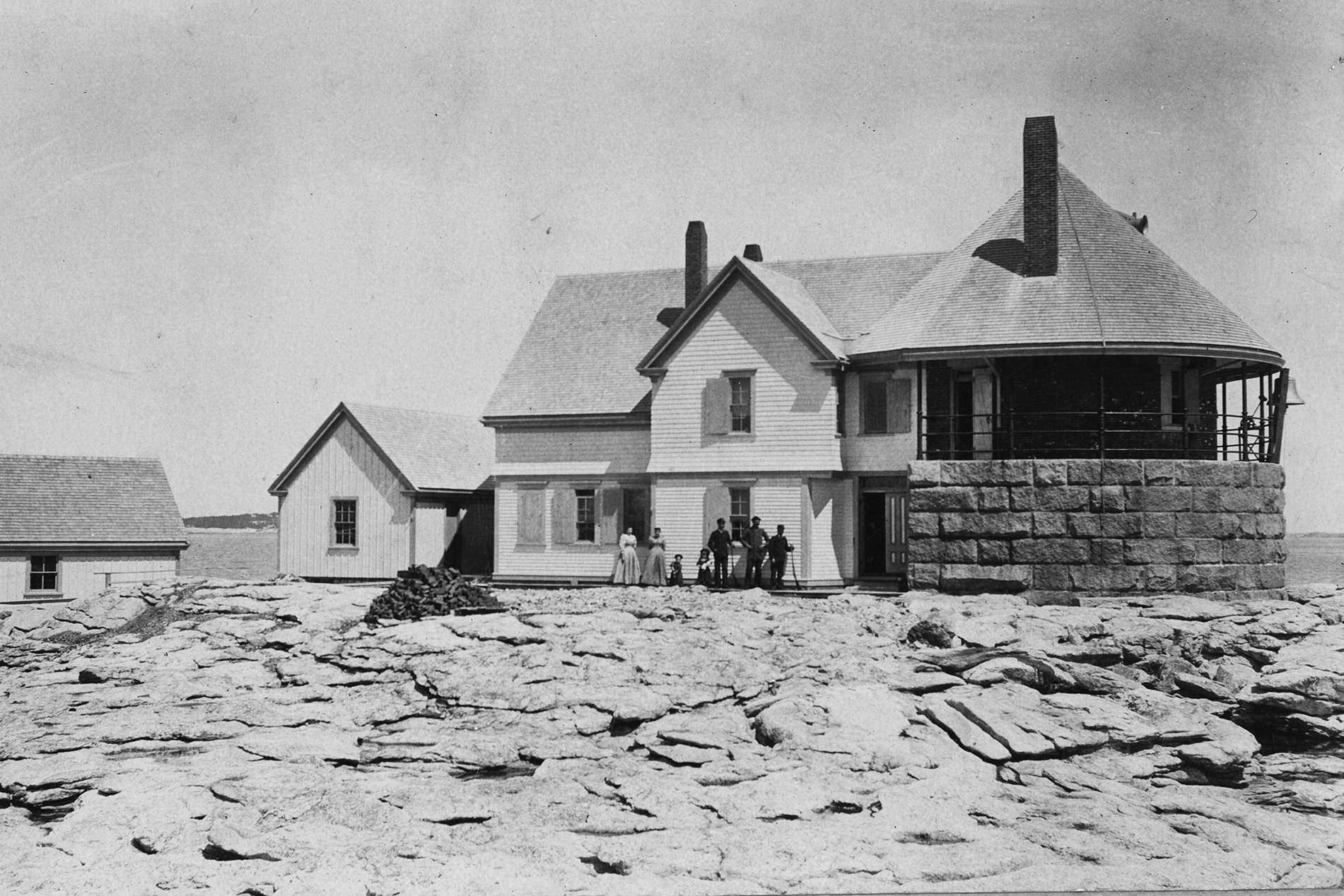 This photograph taken in the late 1800s shows its residents standing outside of the western side of the dwelling. The duplex’s frame was bolted to the ledge and the two units mirrored each other down the ridge of the roof. Each half consisted of a kitchen, pantry and sitting room on the first floor and two bedrooms upstairs. Note the wooden shutters to seal up the windows during bad storms as waves have been known to reach the second story. In 2014, the keeper’s dwelling pictured here was rebuilt by Marden Builders, a local Boothbay Harbor contractor, as was the boathouse and boat-slip. A group of local and summer residents formed a nonprofit called the Cuckolds Rescue and received transfer from the federal government. The property is now awaiting to be transferred again to new stewards. Note the solar array for power to the station.

What Changes Were Made to the Fog-Signal Over Time? In 1892, a Daboll trumpet can be seen exiting the roof. It operated by a coal-fired, hot-air engine sending compressed air over a steel reed vibrating within the horn. In 1893, a 1,000 pound bell was installed as a back-up while the fog-signal machinery was building up air pressure for the Daboll trumpet. Around 1971, the fog-signal was changed to diaphragm foghorns with a characteristic blast at this station of 2.5 seconds followed by a silent period of 17.5 seconds. The landing place was in the gut between the two islets that comprise the Cuckolds. In the photo, it is an unusually calm day for the keeper to row back in his dory from the mainland with supplies. Upon return, the boat-slip received the landed boat and a hand winch was used to haul it up into the boathouse.

Note the building on stilts to the right called the oil-house. It stored the highly combustible kerosene burned in the lighthouse’s lamp. The structure was bolted to the ledge and elevated to allow waves to wash under it during storms.

Press the red star on the photo to the right to learn about each component of the light station.

The best way to see the Cuckolds is aboard a tour boat from Boothbay Harbor or by land at the end of Landing Road, Southport, Maine. There isn’t any public access to the island at this time. The property is awaiting transfer from the National Park Service to the Friends of Cuckolds Light, a local nonprofit organization. While at the Town Landing, Cuckolds will be to your left. Directly across on Cape Island there is a red house once owned by Margaret Hamilton, the “Wicked Witch” in the Wizard of Oz movie.